Forty-one responses were received, of which eight were from individuals and 33 from organisations and groups. The discussion paper was generally welcomed. The need for a strategic dialogue on woodland expansion was widely felt, particularly if it forms part of a process to develop a joined-up approach to land use.

This document explores how woodland expansion can best increase the delivery of public benefits from Scotland’s land. 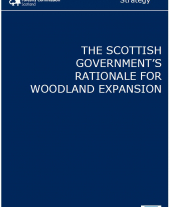 This document lays out the Scottish Government’s thinking on how woodland expansion can best increase the delivery of public benefits from Scotland’s land.