Greens Farm comprises 380.73 hectares (ha) which mainly supports a stock farming enterprise. There is also some arable farming and currently 99 ha of mixed mainly native broadleaved woodland. Most of the woodland was planted within the last 20 years under separate SRDP Scottish Forestry Grant Scheme (SFGS) planting schemes. An area of 10 ha is pending restocking following a clearfell operation that was undertaken in 2015 when three 40-year-old, partly windblown, mixed conifer shelter woods were felled. These woodlands produced timber of generally poor quality, the major constituent of which was for chipwood and fuel wood. A further 21 ha of new productive conifer woodlands have been planted by Scottish Woodlands Ltd.

A guide to the CSGN Contribution for new woodland creation in Central Scotland, Ayrshire and parts of Fife. 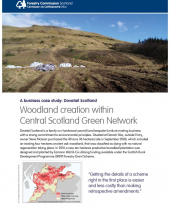