Phytophthora ramorum (P. ramorum) was first found in Scottish plant nurseries in 2002 and in gardens and parks in 2007. The first infection on Scottish larch trees was confirmed in 2010. P. ramorum is capable of causing extensive mortality in larch trees, particularly in the wetter west of Scotland.

We conduct helicopter surveillance and follow up ground surveys of symptomatic larch to detect and control new outbreaks and to monitor the spread of P. ramorum on larch. The outbreak update map shows the progression of the disease. Outside the Management Zone, P. ramorum has not been detected in over 90% of the larch in Scotland, underlining why continued control actions are necessary to slow down the rate, extent and severity of disease expansion.

Is the area where actions will have the greatest impact on controlling spread of P. ramorum. Outbreaks to date have been limited in scale and control efforts have been successful at eradicating infections on larch. Prioritisation of survey and regulatory efforts will ensure Statutory Plant Health Notices (SPHNs) are issued quickly, with felling required, wherever possible, before the end of August in the year of detection.

Is the area where spread and scale of infection is beyond what can be controlled locally with available resources. The principal aim is now to reduce the risk of P. ramorum to the sector. Statutory actions in the form of SPHNs will continue to be used as the main tool to ensure consistency of control efforts across the range of land ownerships.

An area in south-west Scotland at the heart of a major surge of P. ramorum on larch in 2013 was designated* as a Management Zone (shown by the red outline on the map below – illustrative only). Within this zone the disease was too advanced to stop its spread within the area, so efforts have been focused on tackling new outbreaks in Scotland outside the Management Zone. 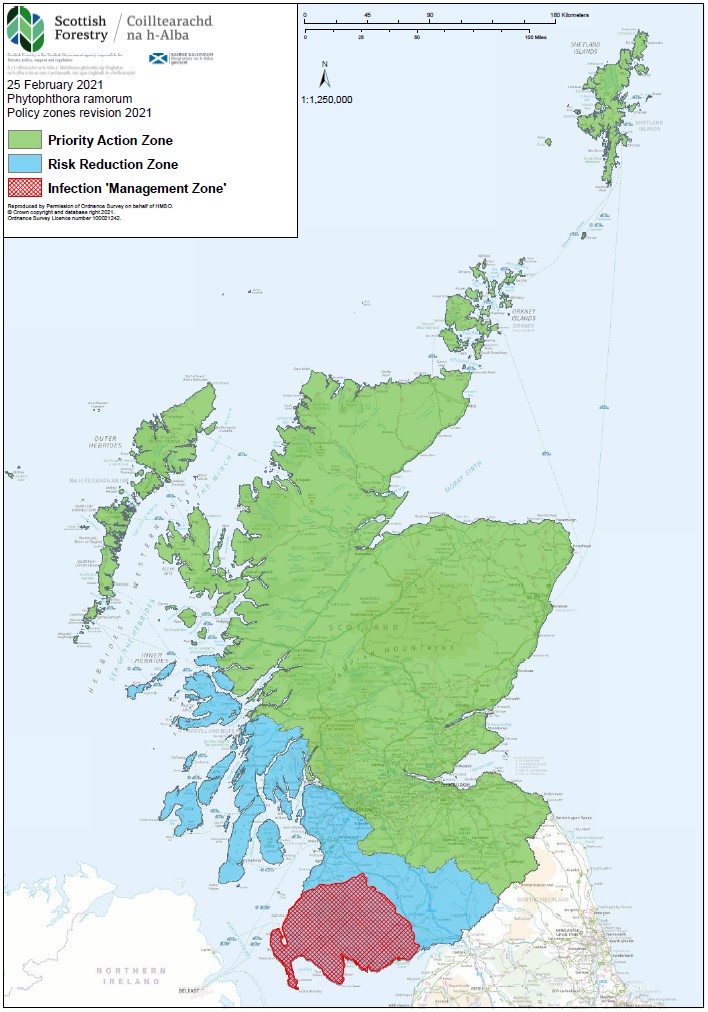 Statutory Plant Health Notices (SPHNs) are issued requiring the felling of larch trees infected with P. ramorum plus larch within a 250 metre buffer zone everywhere in Scotland outside the Management Zone. SPHNs for P. ramorum are generally not issued inside the Management Zone, in order to allow the phased removal of larch within the capacity of the forestry sector to harvest and process the timber.

You must apply for a movement licence to remove wood from a site issued with an SPHN or to move larch material from within the Management Zone to any site outside it. Wood from SPHN sites or wood moving from within the Management Zone to a site outside it can only go to a facility that holds a processing licence to handle it. Information on applying for movement or processing licences can be found here or contact your local Scottish Forestry Conservancy Office for support.

Land managers can download posters highlighting actions forestry workers and members of the public can take to minimise the risk of spreading Phytophthora ramorum.

Reporting suspected sightings of P. ramorum outside the Management Zone

If you suspect a forest or woodland might be infected, or you have noticed suspicious symptoms, please report it without delay to the Scottish Forestry This email address is being protected from spambots. You need JavaScript enabled to view it. with a description, location and digital images if possible. If you own or manage a woodland, please maintain vigilance and inspect your woods regularly, particularly where larch and/or rhododendron is present.