An overview of forest resilience

How to build forest resilience?

Building resilience is about managing risk – reducing the harm from, and exploiting the potential benefits of, climate change. Well-understood practices such as restructuring to bring in a diversity of ages, structures and species will help to manage risks and build the resilience of forests and forestry businesses to the changing environmental and economic conditions and market preferences than can be expected in the years ahead. 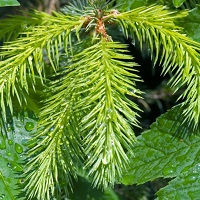 A large forest of predominantly Sitka spruce with small elements of riparian broadleaves and minimal open space, surrounded by other forests also dominated by Sitka spruce. The manager’s objective is to maximise returns by producing large volumes of sawtimber for the market.

A large forest of predominantly Sitka spruce, where a wide range of conifer species were tried out in early plantings. The standing crops of Sitka spruce and lodgepole pine are coming to final felling age and extensive restocking is required. The manager’s objective is to maintain the balance between timber, landscape, recreation and biodiversity values. 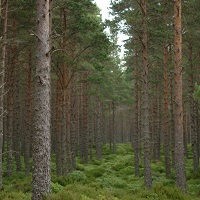 A large area of well-structured pine plantation (mainly lodgepole and Corsican) on a dry site in the east of Scotland. The manager’s objective is to produce large volumes of timber for market and to enhance this attractive site as a visitor facility.

4. Native woodland on the west coast 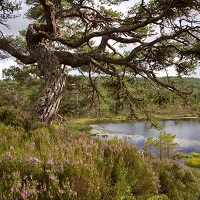 A series of small- to medium-sized native woodlands including some gorge woodlands, separated by grazed land. Composed of native species with rich bryophyte interest, but with browsing pressure and some rhododendron invasion.

5. Caledonian pinewood in the Cairngorms 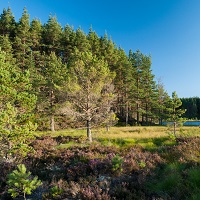 A large native pinewood providing a home to iconic forest species such as capercaillie and red squirrel. Ancient ‘granny’ pines make a disproportionate contribution to the biodiversity and aesthetic value of the site. Some areas planted at timber-producing density with Scots and other pine are now reaching a harvestable size. 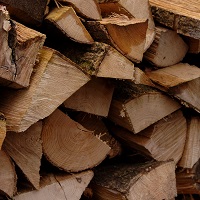 A proposal to create a large new woodland on a predominantly upland site in north Scotland. The main aim is to create a woodland with the potential for future timber production and Sitka spruce is the manager’s default choice of species.